UNITED NATIONS, July 30 (Xinhua) -- In response to U.S. President Donald Trump's intention to attend this year's General Assembly General Debate in person, a German diplomat said on Thursday that it makes no sense for world leaders to be physically present given the COVID-19 pandemic. 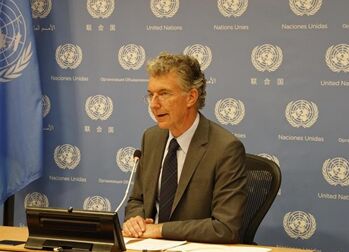 "Taking into consideration the prognostics for September, we believe that it doesn't really make sense to have a high-level week, to have the General Assembly, where you have leaders attending," he told a press encounter at the end of his country's Security Council presidency for the month of July.

Heusgen confirmed that there are no plans in Germany for either Chancellor Angela Merkel or Foreign Minister Heiko Maas to fly to New York for the General Assembly high-level week.

"We have to be careful. We must not endanger people by coming with a big delegation here. And therefore we agreed to the proposal to have the leaders present their speeches in a virtual way."

U.S. ambassador to the United Nations, Kelly Craft, said Thursday that Trump hopes to address the UN General Assembly in person in September.

A UN spokesman said Trump's presence at the General Assembly is a matter to be coordinated by the United Nations and the United States.

"I don't want to speculate on what the future will hold. As you know, the (UN) Secretariat will be in touch, basically through the Office of the President of the General Assembly, with the member states on their representation," Farhan Haq, deputy spokesman for UN Secretary-General Antonio Guterres, told a virtual press briefing.

"We have made clear to all member states the need to keep the delegations' numbers low. There is an absolute upper limit of how many people we can safely accommodate, and all member states have been made aware of that. How they will adjust is a matter ultimately of discussion between the member states and the United Nations."

UN member states agreed last week on special measures for the upcoming high-level week, which allow one, at most two, New York-based representatives per delegation in the General Assembly Hall.

"We trust and expect that all member states will abide by the need to keep the numbers low, and we'll see what they do in terms of their preparations," said Haq. "We will be in touch with all the member states to make sure that the arrangements are appropriate. And we'll need to make sure, again, that we remain within limited numbers so that we can practice social distancing and have safe conditions for everyone who comes into the building."